I don't want to talk about it!

In this essay, I will briefly address three Christian situations/personalities with short excerpts pertaining to the title. I got to know these three men, two of them were pedophiles. Afterwards, I will raise some pointed observations in hope of raising awareness in response to those that don’t want to talk about things!

As a junior in college in 1988, I had asked the question, “Dr. Faulkner, is there any truth to the rumor that Martin Luther King was denied enrollment at Tennessee Temple University (TTU) due to race?” Dr. Faulkner was Dr. Lee Roberson’s right hand man at Highland Park Baptist Church and TTU for decades. For those unaware, the South (USA) was racially segregated at the time. Dr. Faulkner could have simply addressed this, and put an end to the rumor!

Random chance initially paired us together on a local golf course. After that day’s first round, he asked for my number and we ended up playing again on two different occasions. Dr. Faulkner was a pleasant man to be around, but his countenance quickly changed after I had asked the question about Martin Luther King. He didn’t answer my question and that was the last time that he asked me to play a round of golf! I was persona non-gratta afterwards!

Instead of answering a straight up question that could have squelched a long-standing rumor, he let me know that he didn’t want to discuss it. His silence spoke volumes.

At one time, Dr. Bob Gray’s star was as bright as one gets as an Independent Baptist pastor. He was considered to be perhaps the finest pulpiteer in the country; his church’s Sunday-school numbers were amongst the nations largest; he was often in the Sword of the Lord newspaper, and he was the president of Trinity Baptist College!

I was enrolled at his college in 1987 and was called into his office for “disciplinary” reasons due to two preacher’s kids getting demerits for being tardy. His associate pastor gave me the “heads up” for what I was about to encounter. He told me that he had never seen anything like this before and that he was having problems with “they’re having a meeting with me” about something so petty! He assured me that I had done nothing improper and he told me that he admired my character and work ethic. Nevertheless, I walked into a crowded room with all of the school’s “luminaries” gathered for my head.

I listened with disgust as the stooges proceeded, it was clear that they had no interest to discuss things. I asked, “Did you consider what your distinguished associate pastor who knew all of the details had said? I see that no one present here was decent enough to talk with me man to man prior to this “big” meeting!” I then looked Dr. Gray straight in the eyes and said, “you ought to be ashamed of yourself!” He demanded that I apologize immediately for my statement. My last words to the man were these: “I will not apologize! I am a reasonable man; you and your staff members have no sense of equity! You’re a bunch of perverts!” I adjourned the meeting and transferred to another school! The associate pastor resigned, leaving the school as well!

Those last words that I spoke to Dr. Gray proved to be prophetic in deed! Dr. Bob Gray was a pedophile and the church had covered these things up for quite some time! He was imprisoned and was awaiting trial when he died. Should you want more details, visit this link about Trinity.

PS: While I didn't know at the time of Gray's pedophilia, I take great satisfaction in recognizing, 20 years earlier than the general public, and was able to look the bastard in the eyes and to call him a pervert to his face! Priceless!

I once knew Donald Domelle and his family very well! I attended his church, Baptist Temple of Salinas while I was stationed in the US Army in 1983. After I graduated from TTU in 1990, I returned to California and stayed in the Domelle’s home for a few weeks. There were a lot of good memories, amongst those was the time that I took the guys to see Nolan Ryan’s sixth no-hitter in Oakland! But things changed afterwards and we grew apart. By 1993, the visits trickled down to my visiting once or twice a year. 1999 was the last time that I had spoken with Donald Domelle or his wife Margaret (she has since passed away). 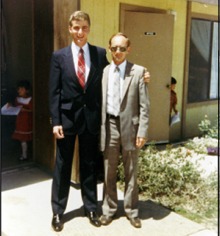 My first acquaintance with one of the victims was just prior to my leaving the church in 1984 (I received orders to West Germany). This victim came under the Domelle’s custody about the time I departed California and was adopted about the time that I returned in 1990. She was a sweet and lovely child that shared the common desire that all kids need growing up: the security and feeling that she belonged and was loved! The victim’s mother’s lifestyle choices resulted in an inappropriate environment to raise a child. So she turned to someone that she thought that she could trust to raise her daughter.

It pains me to think of all of the agony and suffering that this victim has had to endure in life, to me she isn’t just another face in the crowd! In the later years as a visitor, I noticed a rigid demeanor towards the victim, primarily from Margaret. Things as insignificant as a grain of rice falling from the victim’s fork en-route to her mouth were enough to draw the ire of the adopting mother. It must have been a daily living hell for this sweet little girl that I once knew! When she told of her abuse, nobody believed her. She was then sent away (by the Domelle’s) to another Christian school in Texas. She was engulfed in an uncritical culture that was oblivious of humanity!

I don’t think that the mother’s initial decision to turn her daughter over to the Domelle’s was a dangerous decision at the time.  At least two of the Domelle’s own kids were still living in the home then. But time and pressure have ways of changing a man (addressed on The Pleasure Police page). He was a man of small physical stature that after many years of praying with folks turned to preying on vulnerable children while openly occupying a pulpit.

Donald Domelle was facing more that 50 criminal charges but took a plea agreement on Jan. 19, 2006 admitting to two felony counts of lewd conduct with a child and agreed to a minimum of 15 years in prison. He isn’t eligible to apply for parole until he turns 80.

Since discovering this case, I have contacted the closest family member that I knew how to reach in Salinas (this was his son-in-law). My questioning about how such a close-knit family could be so “blind” and fail to notice the events within the home, church, and school went unanswered! You guessed it, “He didn’t want to talk about it!”

There was no sympathy for the victims, only the pedophile. This ex-minister started off in the Independent Baptist culture, I haven’t noticed much critical inquiry from within their movement to curb their pedophilia problems. Both pedophiles (Gray & Domelle) were Independent Baptists.  The Independent Baptist ringleader Jerry Falwell once stated that the Trinity situation was a mere "bump in the road"! With statements like these, do you think that they have a clue?

For the sake of brevity, there is so much more that could be said here. Churches aren’t going away anytime soon. Many of us aren’t satisfied with the effort or effectiveness of churches to address what has become a problem of epidemic magnitude. I do not trust the churches to police themselves! Nor should you! I would welcome and hope that the new incoming Secretary of the Department of Health and Human Services would bring new energy and critical concern in addressing these types of problems. They would certainly have my enthusiastic support!

I can’t help but notice how some church folks emulate their Biblical Adam by evasion and hiding when they themselves are scrutinized or called into accountability! It’s a shame that they have chosen to retain the negative lessons of the scriptures rather than the positive! How can they teach others when they themselves have not learned?

I see right through these folks. They are blinded about the plight of their fellow man and hide behind their pulpits. One senses the inner turmoil of a man that refuses to discuss something. You know one is headed in the wrong direction when they refuse to face reality. Their silence speaks, but what is says about themselves isn't admirable!

There are plenty of good men and women in churches! But the “red flags” should be raised when they do not want to discuss something. Yes, sometimes there are good reasons not to discuss things but churches have proven themselves to be unworthy of the benefit of the doubt!

I am suspicious of those that want to save others from the “devil”. As well as those that insist on “teaching” others something yet they themselves are oblivious to the humanity of their fellow man! So much so that they fail to notice such things as I have addressed here such as racism and pedophilia. They do not want to talk about it, but I do!


To Return to the Main Page